Exploring the lives of those men and boys who lost their lives in the Blantyre Disaster. I’ve investigated the tragic story of 3 Blantyre brothers who died in the Dixon’s Pit Disaster on Monday 22nd October 1877. Francis (23), John (22) and James Welsh (15).

John Welsh b1824 married Elizabeth Smith b1831 on 5th March 1850 in Rutherglen. Over the next 25 years, they would have 14 children. Some of the children died in infancy, but there was one dark and horrific day that would take 3 of their grown up sons, all in one morning.

The couple initially settled down in Cambuslang, but in 1857 they moved to Dalziel, beside Motherwell. However, when the couple were in their mid 40’s, they moved to Blantyre in early 1877, a decision that would mark their family in tragedy.

By 1877, John Welsh had been a coal miner but had not worked for some years due to injury. He was at home at the time of the disaster. However, most definitely on shift, were his three sons, Francis (23), John (22) and James (15). All three sons were single, coalminers for Dixons and still living with their parents at Harts Land, off Glasgow Road, Low Blantyre.

It’s not hard to imagine the three boys wrapped up on the rainy morning of Monday 22nd October 1877 and making their way to High Blantyre Pits though open fields up the Clay Road (which would later be renamed Victoria Street). They would have walked to work in the darkness for all three of them would be down the mine in Pit 3 by 6am.

Following the disaster and when access was reinstated, the sons were all found dead closely together in the ‘North Dook’ in Pit 3, not too far from the number 3 shaft but the youngest son was most difficult to reach. The exact location is likely to be below Hamilton Technology Park at the first offices on the left at the entrance to Westcraigs. 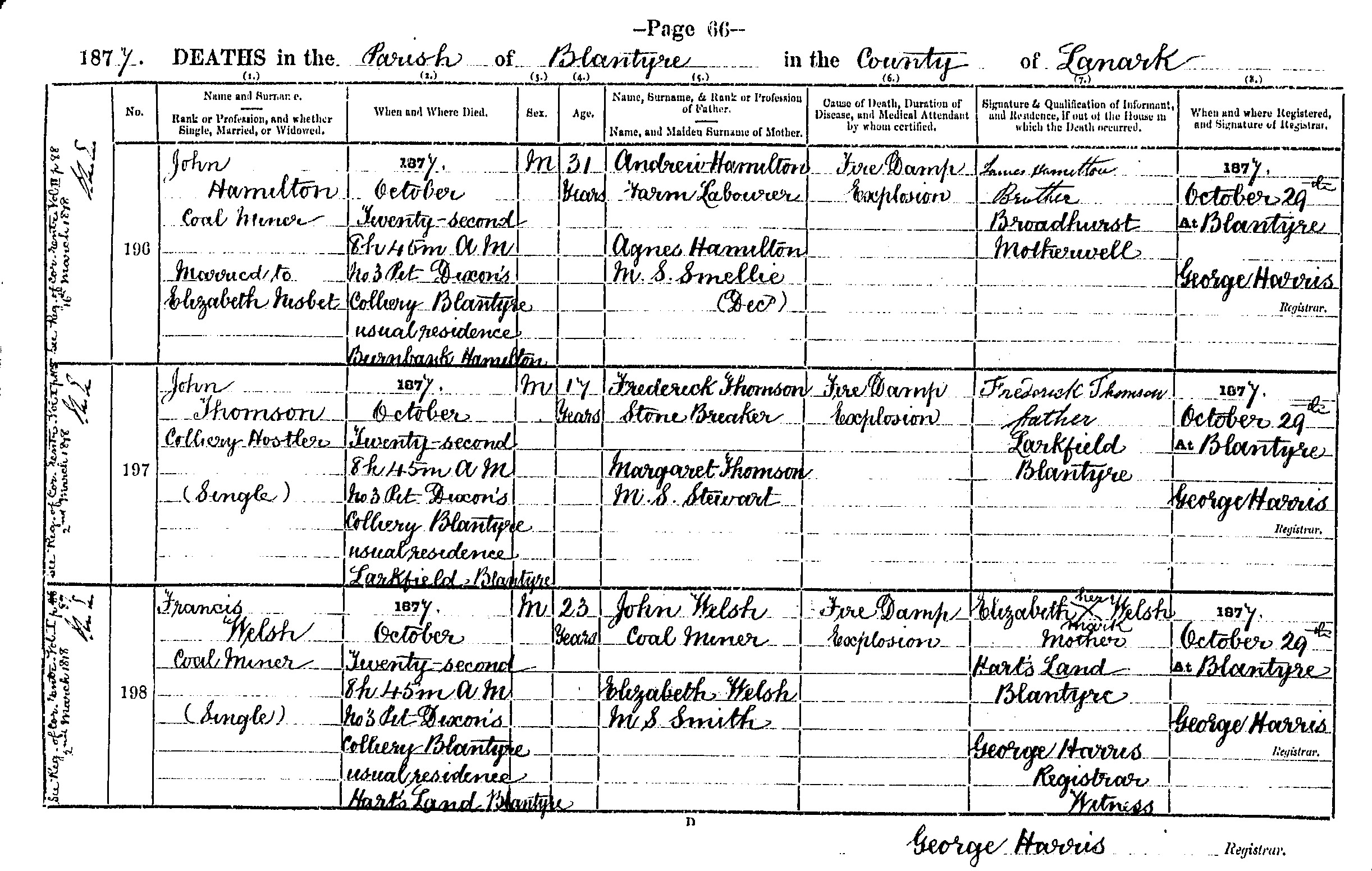 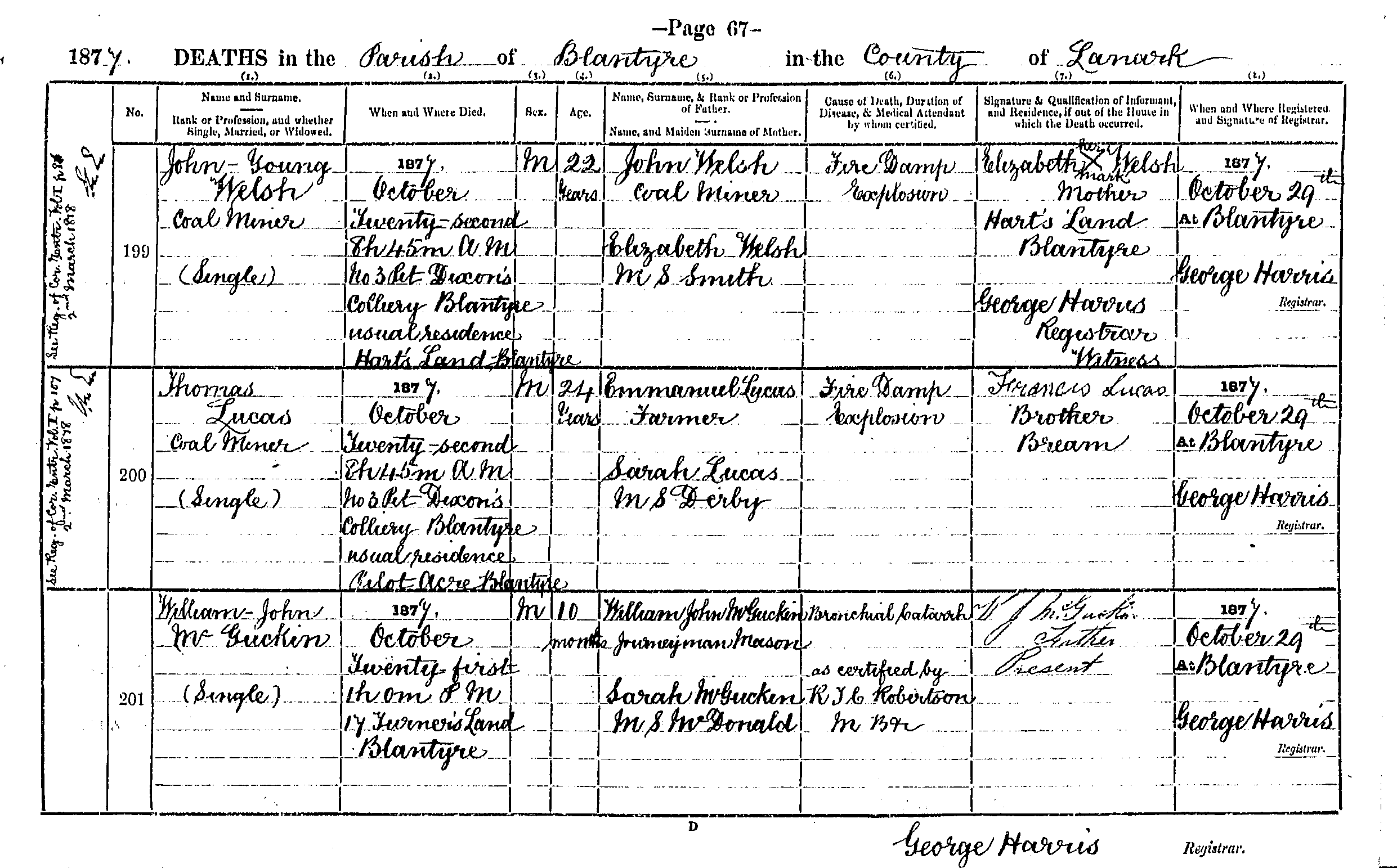 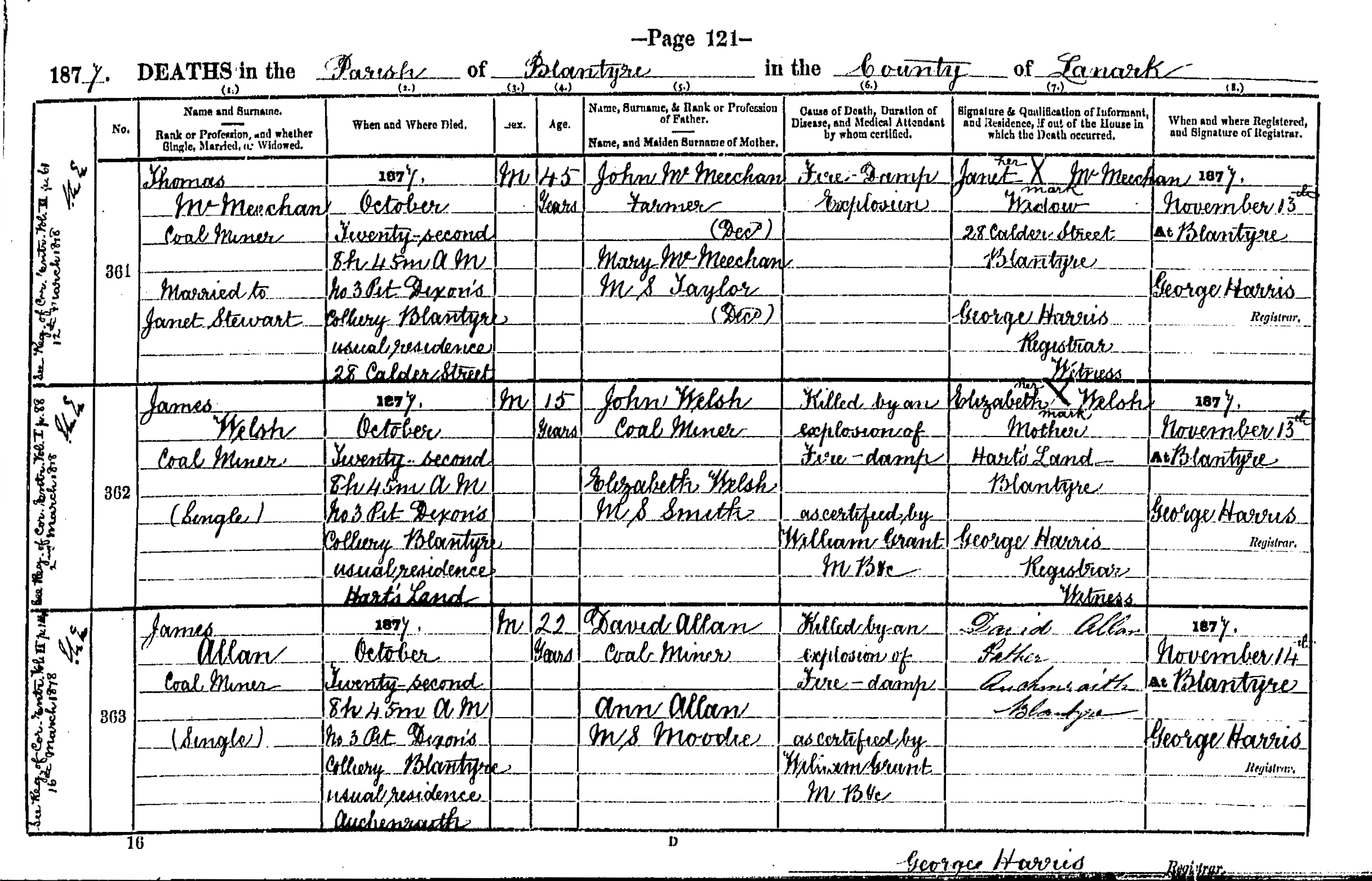 The death certificates of each of the sons were witnessed by Elizabeth Welsh, their mother putting her X as her mark. Sometimes suggesting somebody unable to write, perhaps in this situation it was a sympathetic gesture from the registrar given how grief-stricken she must have been. She did this on 2 separate days. The 29th October a week after the disaster and on 13th November, perhaps reflective of how long it took to bring up her youngest son.

Her son in law, Nicol Kyle also died in the explosion.

There is good (and rare) detail in the newspapers about the Welsh family and the funeral of the sons, given this was multiple death in the family. The Glasgow Herald of 29th October is particularly descriptive.

“The body No. 10, that of a fine manly-looking young fellow, with large square forehead, was said by many of the visitors to be that of John Welsh, but as none were related to him, they would not take the responsibility of identifying it. About seven o’clock the father came, accompanied by a friend named McKillop, Welsh at once recognised the body as that of his son John, who was, he said, 22 years of age, and unmarried. He had other two sons who worked in the mine, Francis, age 24, and James, aged 16. They were all his family, and his only support, for though only 55 years of age, he has been for some years unable to work in the mine. A remark that 55 was not a long age, elicited the reply that many miners were laid aside long before that time; and Welsh, who seemed a very respectable man, was evidently suffering severely from asthma. McKillop has also lost two sons — John, aged 14, and Archibald, aged 13 — but their bodies had not yet been taken from the mine.”

By 29th October both Francis and John Welsh had been recovered from the mine and their funeral took place almost right away, after identification.

That afternoon, a large number of the bodies were interred, and the mournful processions, as they passed along to the cemeteries, were followed by great crowds, and attracted much attention.

But perhaps the most imposing of the funerals was that of the brothers Welsh, who resided with their father and mother in Stonefield, and, along with another brother still in the mine, were their only support. The Welshes were members of the Blantyre Livingstone Lodge of the Order of Free Gardeners, and they were buried with all the ceremonial of the Order.

At three o’clock about 150 brothers of the Motherwell Thistle Lodge, the Bothwell Thistle Lodge, and the Bellshill Daisy Lodge assembled in Blantyre Public School, and services were conducted there by the Rev. Stewart Wright and Mr John McKinlay, chaplain of the Livingstone Lodge. The procession from the house to the grave was headed by the Blantyre band playing Adeste Fideles, and each coffin was carried on the shoulders of four men, the hearse following.

The scene in the parish burying-ground, where the bodies were interred, was very impressive, and by the time Rev Wright got as far in the service as “Earth to earth, ashes to ashes, dust to dust,” many of the onlookers were in tears. Few of them will soon forget the sight — the cold grey twilight, the dark overcast sky, the long deep trench, the silent uncovered multitude, and the solemn tones of the preacher’s voice. As the coffins were lowered into the grave Old Hundred was played. (All people that on earth do dwell)